skip to main | skip to sidebar


On behalf of the Woman's club I would like to thank all the residents, schools, Girl Scout Troops and Church groups who donated personalized Valentine cards for the Troops stationed in Afghanistan. About 1,500 cards were collected and will be sent to the Troops through the non profit organization Operation Jersey Cares. Two large boxes of candy were also donated by the Boonton Township Fire Department.

We are also collecting requested items by the Troops and will be outside the Foodtown on route 53 in Denville on Sunday from 10am-2pm.

It is not too late to donate personalized greetings or Valentine cards - bring them to the Foodtown on Sunday!
Posted by NJSFWC at 4:20 PM No comments:


The Club co-chaired the Highlands District January Council & Program Assistance Day with the Parsippany club. Our club members baked and made the name tags.

About 60 women from the Highlands District attended the meeting and 5 from our club attended.

We heard about the new location of our annual convention, to be held in Atlantic City, May 6-8 at the Golden Nugget.

Each club had an opportunity to speak about 3 programs that they enjoyed at their club meetings from 2012. We had the opportunity to interact with other clubs from around our district and of course, there was plenty of food! 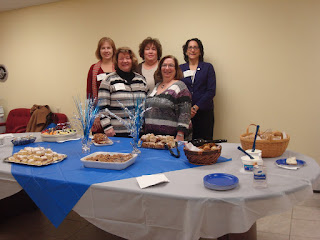 Posted by NJSFWC at 1:31 PM No comments:

We are presently collecting homemade Valentine Cards for the Troops stationed in Afghanistan.
Any individuals, groups or organization that care to participate can drop completed cards off at:
Restyle & Renew or SmartWorld Coffee, both in Denville or the Rockaway Township library.

Cards are being accepted through January 25th and will be sent to Afghanistan through the non profit organization Operation Jersey Cares.

Thanks for your support to the Troops!
Posted by NJSFWC at 7:27 AM No comments:

Stop by Shop Rite on Sunday, October 21st between 9:30-1:00pm and donate to our food drive to support the local food closets.
A list of requested items will be available.
Shop Rite on Route 46 in Rockaway

Join us for a night out at the Somerset Patriots game
Thursday, July 27th
Game is at 7pm and fireworks show after the game
Tickets around $11.00
Email us if interested.
gfwcdenvrock@aol.com

Join us at our Day General Meeting
Tuesday, March 14th and find out what the Woman's club
is all about!
An orientation will be held after the business meeting.
1:00pm General Meeting
2:00pm Orienation
Welcome to attend the meeting and refreshments
will be served
Meeting locaton:
Denville American Legion Hall
Legion Place, Denville
Call Nancy for more info: (973) 328-0214

Join us February 13th at 7:30pm for our evening meeting
Denville Community Church, Denville
or our Day meeting, February 14th (wear RED) at the American Legion, 1:00pm and help us with our Cookie/Candy project.
We fill decorated coffee cans with homemade cookies and candy and donate them to Cheshire House & some of the businesses that have supported our cub over the past year.
Guests always welcome!

Please stop by the Shop Rite in Rockaway from
9:00-1:00pm on Sunday, October 23 and support
our food drive!
All food items collected will be donated to Denville & Rockaway food pantries.
Donations also accepted!

Tuesday, August 2nd
Fireman's field
Beach St.
Rockaway Borough
6:00pm=8:30pm
Stop by our booth and say hello!
We will have cards and supplies to make personalized greetings cards for the troops stationed overseas.

Back to School Supplies

We will begin our annual back to school supplies collection in
July - watch for our drop off sites.
Collection will run through August 13th.
Stop by and visit our table at National Night Out, August 2nd at Fireman's field in Rockaway Boro.

Haircuts for a Cause

Stop by the Rockaway Township library through
the month of April to check out our display in
the showcases!
April general meetings are Monday, April 11th &
Tuesday April 12th, both during National
Volunteer week.
Guests are always welcome! 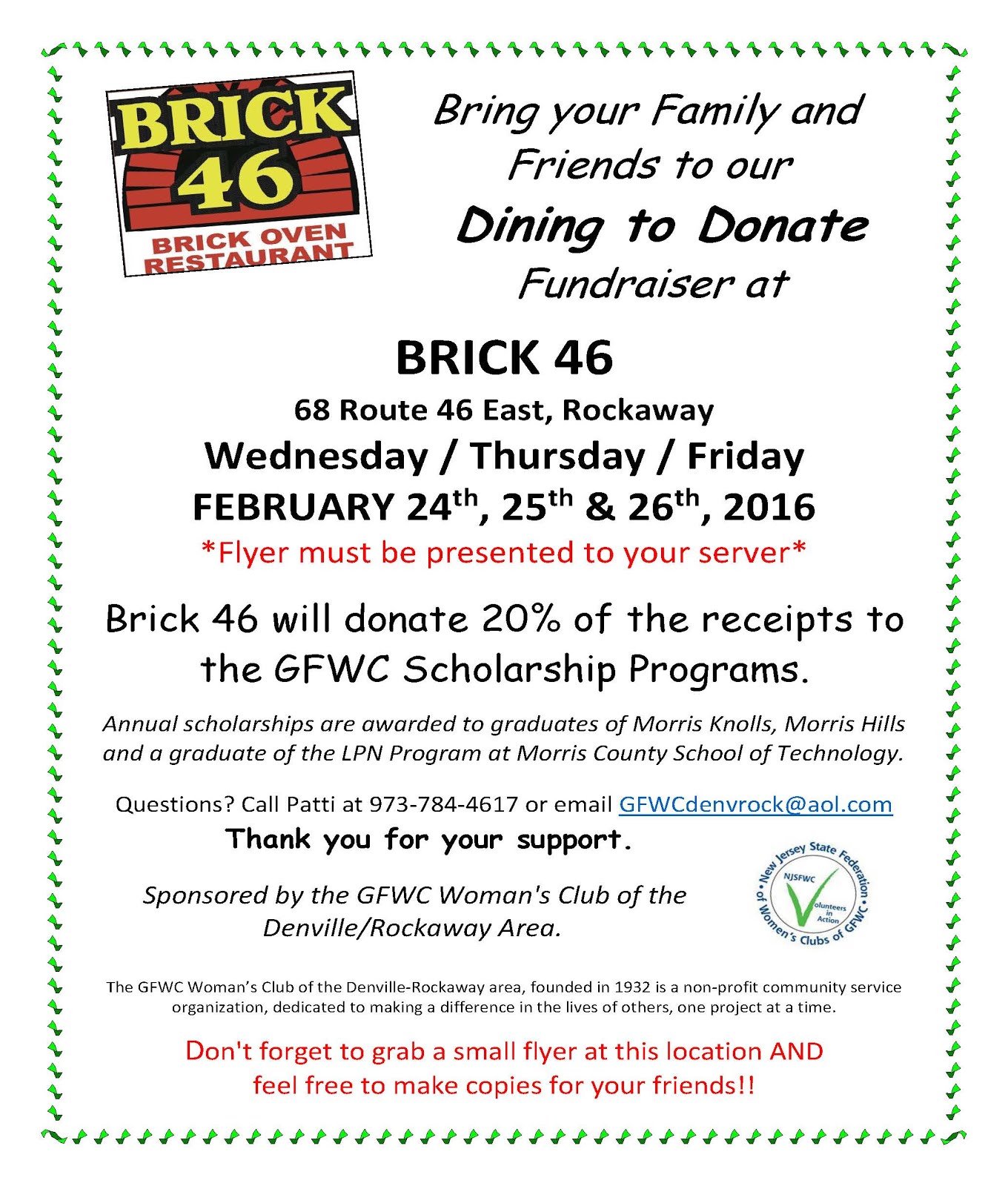 must present to server

Join us for a Dining to Donate fundraiser
February 24, 25 and 26
Brick 46
Route 46 East, Rockaway
The restaurant will donate 20%
back of checked receipts to the Club for our Scholarship program.
You must present a flyer for the club to receive credit.
See flyer on main page of Blog

Dining to Donate at Brick 46 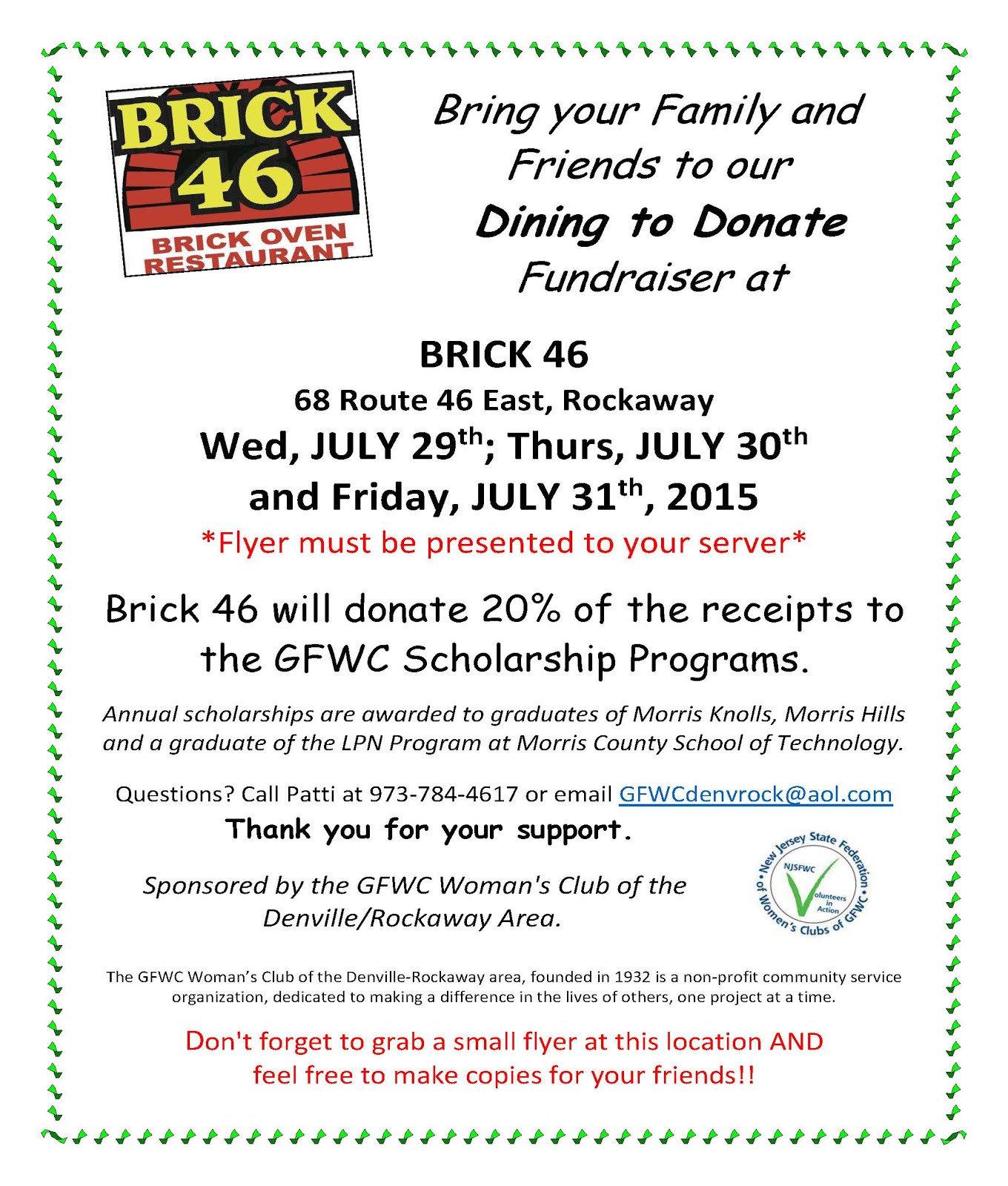 A Night of Dancing July 25th 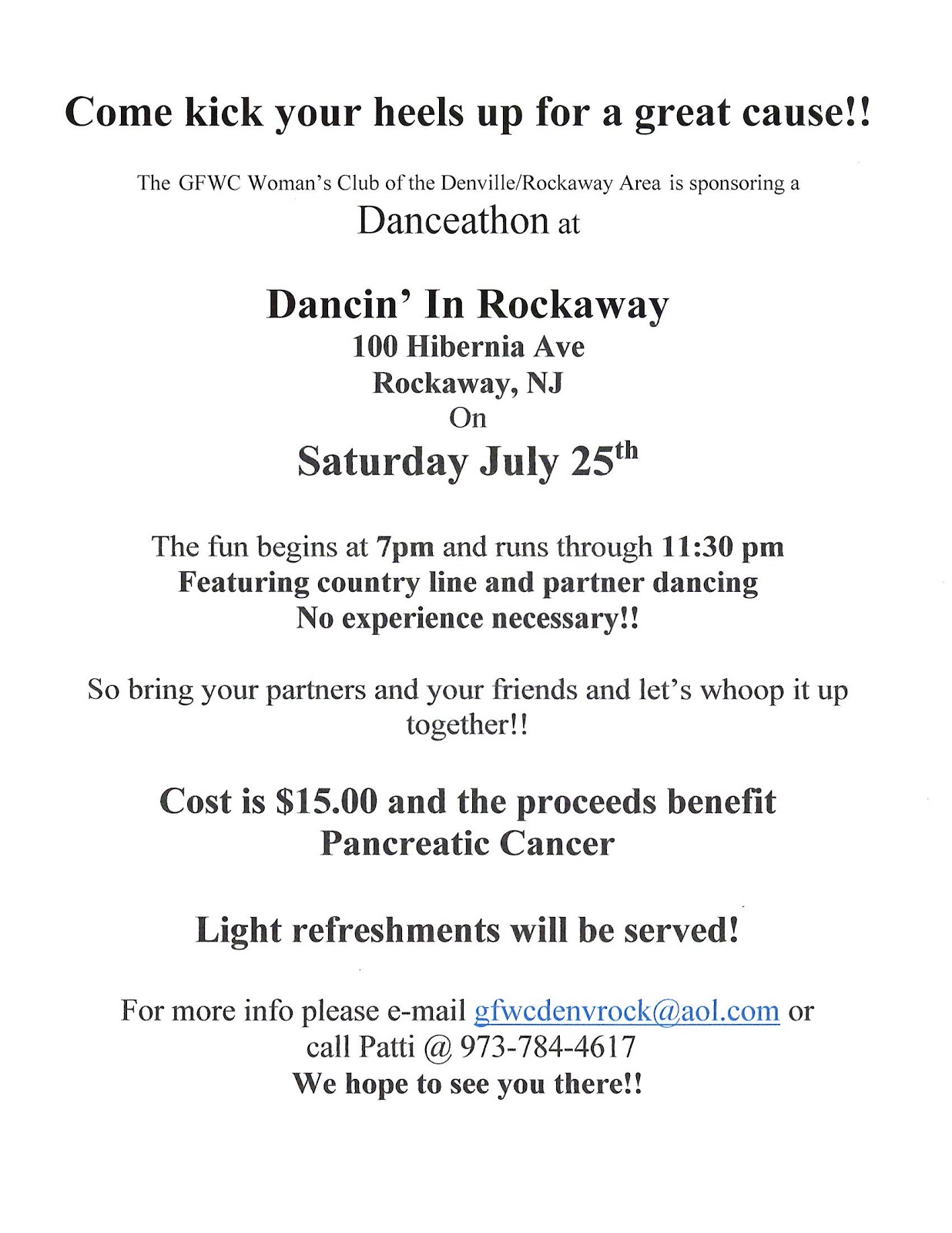 Dates in July: Join us!

Join us for our Beach Party social,
Monday, June 22nd
6:30pm
It is at a member's home, so email us to RSVP & directions.

Join us for March meetings

Feb. 25, 26 & 27
Brick 46
Route 46 E, Rockaway
THANKS TO ALL WHO SUPPORTED THIS FUNDRAISER!
Join us for lunch or dinner:
restaurant will donate 20% of checked receipts
to club for our scholarships.
Flyer must be presented to server for club to receive funds.
See flyer in main portion of blog,

Join us for lunch at Thai Nam Phet on Route 46 E in Rockaway for lunch at noon.
Come find our what the Woman's Club is all about and enjoy lunch with us!
After lunch join us for a knitting & crochet workshop at a member's house,

Join us Saturday, April 12th at 10am
to clean up along Morris Ave, across from the Hampton Inn.
All are Welcome!

Don't forget that our Easter basket collection is running through March 29th.
Collection sites include:
Union Center National bank
Restyle & Renew
Picatinny Federal Credit Union
Denville library
Mountain lakes library
Fulton bank
Email us if you would like to have us pick up your donations.

At our Day March meeting, March 11th
join us for a program entitled:
Navigating the Internet & Social Media
by Tom Daly of TRD Advantage.
The meeting starts at 1pm and the program begins at 2pm.
Guests welcome!

Join us for a visit to the Morris Museum on
Thursday, December 12th.
Spend the day with us and enjoy lunch prior to the museum!
Call (973) 219-1794 for additional information.
One of our many social events!

Come for lunch or dinner at
The Rockaway River Barn
Greenpond Rd, Rockaway
15% of the days checked receipts will be donated to the club to benefit our scholarship programs.
Please make sure you tell your server you are there for the fundraiser!

Hike to the Hawkwatch

Join us for a Hike to the Hawkwatch at Wildcat Ridge, located in Rockaway township
Saturday, September 28th in support of
National Public Lands Day.
Meet us at the parking lot at 9:30am
Take Greenpond Rd 6.3 miles
Right onto Upper Hibernia Rd
2.7 miles to the gravel driveway.
Call for more info: (973) 219-1794

Thanks to all the generous residents and drop off sites that contributed to our Back to Schools supplies project!
We thank you all for your support!

Stop by Shop Rite on Route 46 in Rockaway on Sunday, August 18th to drop off school supplies.
We will be collecting from 9am -3pm and any items or donations are appreciated.
Items will be distributed to students in Denville & Rockaway.

Enjoy lunch or dinner for a Great Cause:
Wednesday, July 17th
the Rockaway River Barn
11 Greenpond Rd
Rockaway, NJ 07866
The restaurant will donate 15% of the days receipts to the Club and we will donate the proceeds to Family Promise.
You must mention to your server that you are there for the fundraiser to qualify.

Visit us at Denville's farmers Market

Denville's Farmers Market
Sunday, July 9th
8am-1pm
Come visit our table!
Find out what we are all about!

Join us for our annual Ice Cream social on
Thursday, August 15th, 7pm
The event is at a member's home, so please call (973) 328-0214 to RSVP
or email us at gfwcdenvrock@aol.com.
Come find out what the Woman's club is all about and enjoy some delicious ice cream!

General meetings in May

Join us at Panera Bread for coffee and dessert
7:00 pm- 2/19
Outer Rockaway Mall
Guests Welcome!
Come find out what we are all about!

Join us at a member's house on Monday, Jan 28 for a craft night.
We will be making red ribbons for Healthy Heart month.
Friday, February 1st is National Wear Red Day
email us gfwcdenvrock@aol.com
or call (973)219-1794

We wish you all a very Happy & Healthy New Year!
May 2013 be a great year, with no hurricanes, floods or droughts!

We have scheduled a tour of Craftsman Farms in Parsippany for Thursday, November 29th
10:30am
Please feel free to join us!
The tour is $10.00 and about 90 minutes - join us for lunch afterwards!
email us at gfwcdenvrock@aol.com

Visit us Sunday in Denville!

Stop by our table at the St. Francis fall festival on Sunday - rain or shine!
We have lots of great items for sale, including scarves, club cookbooks and Denville historical 'cats meow' houses.
Don't forget our Children's Book collection runs through October 26!

Visit us this Sunday!

We will be selling club cookbooks, scarves and Denville historical houses!

Stop by and say hello!

Join us at our September meetings:

Visit us at National Night Out


Own a piece of Denville history by purchasing one of the Denville 'cats meow' historical buildings we have for sale. 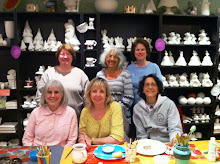 You missed a good time!

Join other club members in a fun social evening and also have the opportunity to make a piece of pottery for yourself or give as a gift.

There is a fee for your piece and glazing. 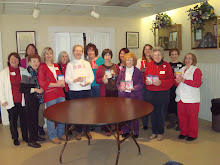 Check us all out with our completed coffee cans- filled with homemade cookies!

Join us on Monday, January 16th at 7pm for dinner and/or dessert at the Panera Bread at the Outer Rockaway Mall (next to Petsmart) 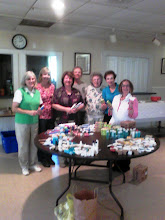 we put together over 100 bags for social services 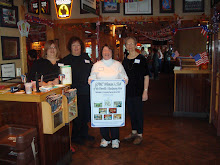 Day of Service project - Parsip ladies and Joyce, our DVP with Marisa & Ellen 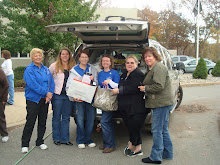 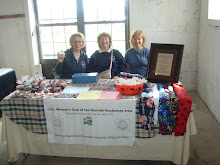 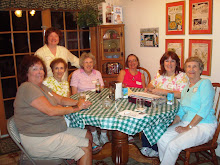 Monday, September 12, 2011
is our next General Meeting. We will not be holding a Day meeting for September.
Guests and prospective members welcome!
Coffee/Tea & Socializing at 7pm, meeting at 7:30pm
Denville Community Church
Diamond Spring Rd
Denville, NJ
email: gfwcdenvrock@aol.com

Route 10 West to Powdermill North (right turn)
Go to first street on left and make left onto Bahama Rd.
Continue all the way to the bottom and make a right onto Waterloo.

5th house on the left(american flag in driveway) 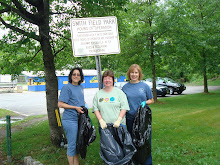 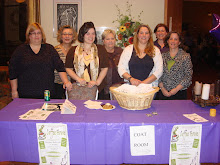 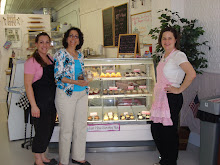 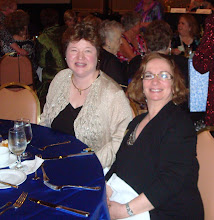 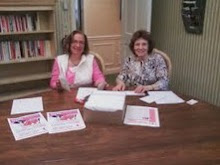 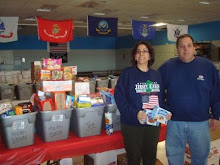 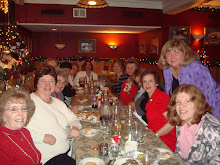 Dinner at The Exchange 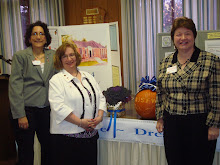 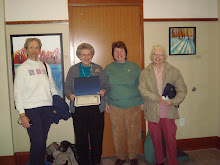 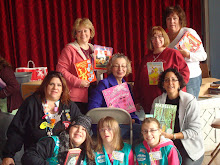 Our President with Scarecrow!

Look for them on Main Street.

The GFWC Woman's Club of the Denville-Rockaway area is a member of the New Jersey State Federation of Women's Clubs (NJSFWC) of GFWC. Visit their websites at http://www.njsfwc.org/ and http://www.gfwc.org/.


The club was founded in 1932 and joined the State Federation in 1947. For additional information regarding the Woman's Club: bmccloskey@hotmail.com 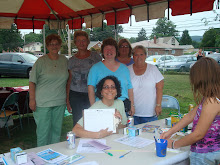 Making cards for the soldiers 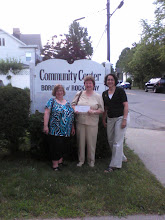 We did a cleanup on Main Street in Rockaway Borough 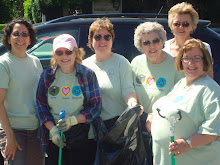 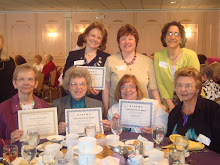 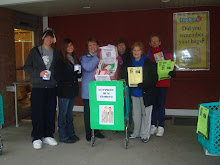